If you are using containers there is a good chance you are already creating a container build environment to build your images. Wouldn’t it be awesome to leverage the same environment to test applications as well?

It turns out it is not only possible, it is also easy and elegant, since you are using the same environment to build and test the application.

For that we leverage Docker multi-stage builds. The idea there is to use two stages1:

A multi-stage build starts with a multi-stage Dockerfile. I have put a sample solution on GitHub, which builds a typescript solution in a node container. Such a file looks like that:

The first stage copies everything into the build container from the current host folder, then builds the typescript solution using the npm commands. Finally, it runs unit tests, and reports on test coverage. The build will fail at this stage if tests fail, or if the coverage doesn’t meet configured criteria.

The second stage copies the result of the build from the first stage (located in /app/dist/src) into the a “root” folder (that we call /app). It then restores only the packages required for production, rather than everything including test harnesses and such, then just defines what to do to start the application when the container is started (the ENTRYPOINT command).

We trigger the full build with the following command:

This yields the following logs:

Image is built, we can do whatever we want from it.

Building and testing is nice, we might also want to retrieve the test results and coverage results to publish and retain these. Docker allows you to target only a certain stage of the build, a feature we can use for this purpose.

To do so, run the docker build command with the --target flag. In the example I built, the target is called nodebuild, so the command is:

Docker terminates the build process at this step. We now need to retrieve our test results. To do so, we will create a new container from the image2, copy the files, then delete the container:

From there we can just resume the full build by removing the --target flag, using the same docker build . -t demo command we ran earlier. This yields the following interesting result:

Note that the first 4 steps, which we just ran to assemble the “test” image, are all returning Using cache.

This is because Docker builds images in layers. Each step of the Docker represents a new layer above the one just below. The base image is the first layer, the workdir is the next one, then the COPY is the next one, etc. All these layers are stored in the local registry (unless pushed into a central registry).

Since the source code and the Dockerfile didn’t change between the runs, Docker is actually not rebuilding the first layers, but reusing the ones we built before → this means our little endeavor does not even requires building the image several times!

Run all that in Azure Devops (or your favorite CD tool)

The build process is the exact same as described above:

This is the overview: 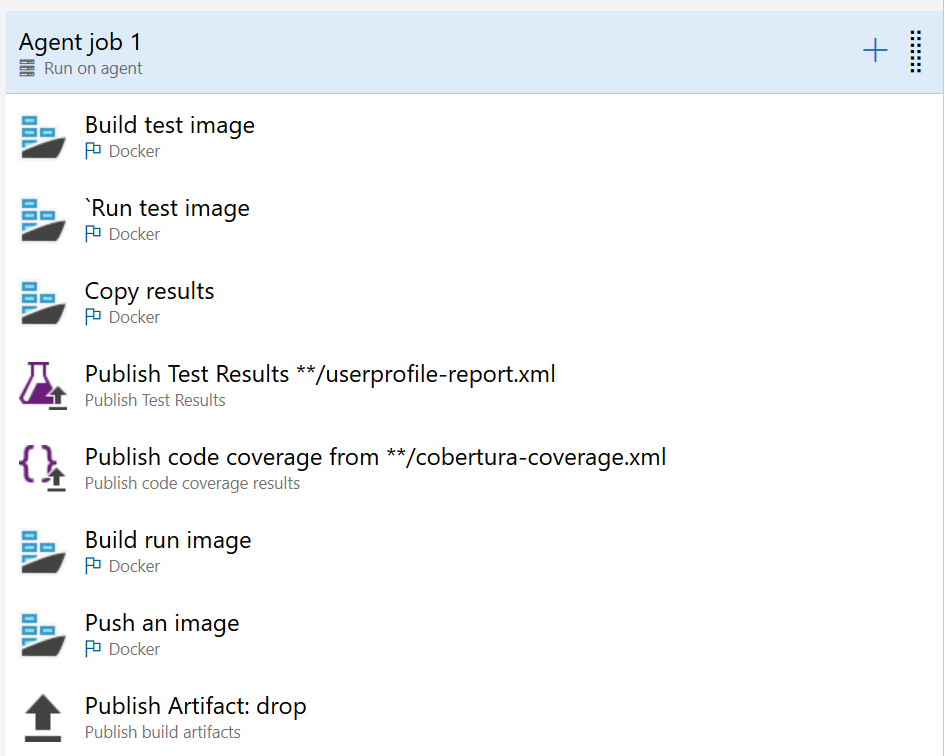 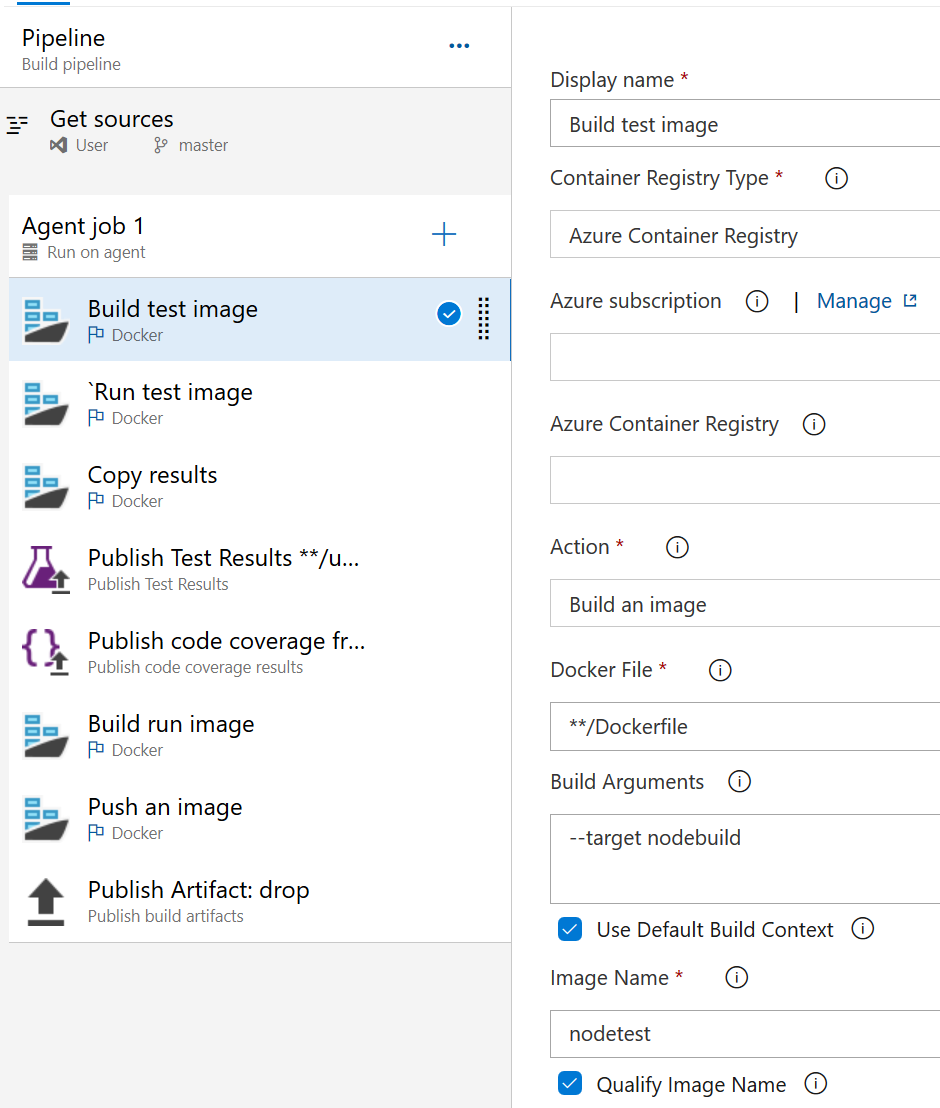 The run command is done thru the Docker task and starts a container from the image we just built: 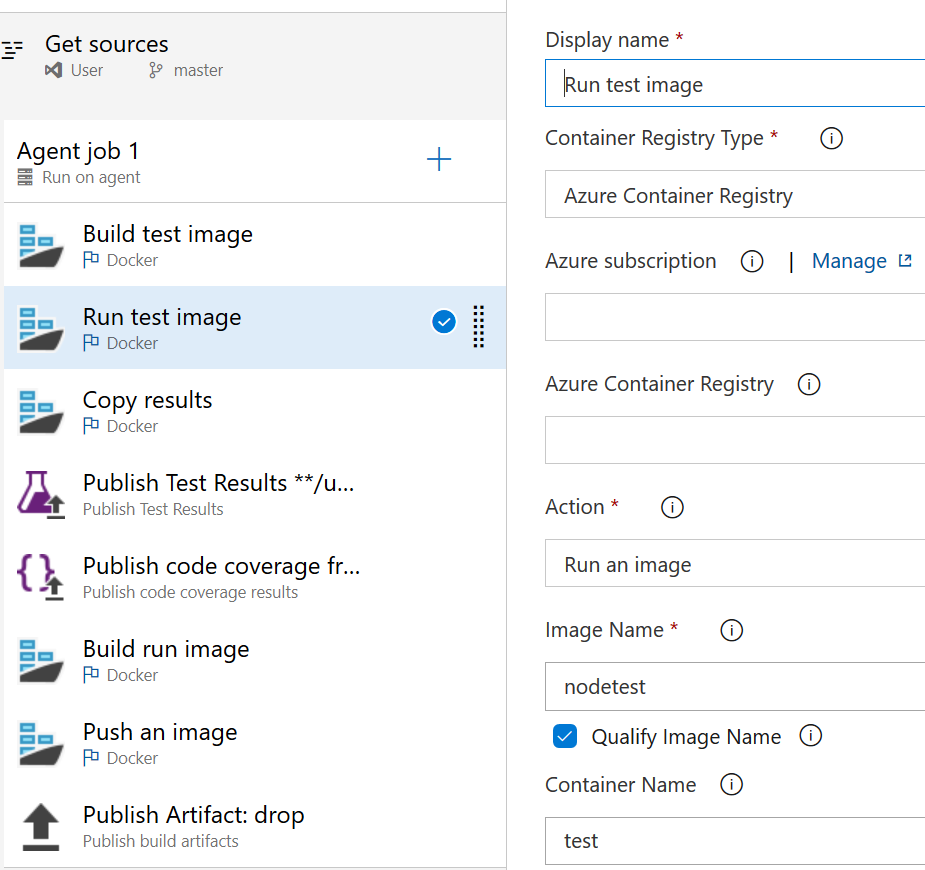 The copy command is done thru the Docker task again and copies the test results from the container we just started:

The rest is basic Azure Devops.

Note that at no point you need to know what’s inside the image. In fact, for all we know this could build a dotnet app, or a Java app. As long as it spits the reports in the same folder, the build would be the exact same, and that’s what is very powerful with this method: you can have the same task group and apply it to all your repositories and just repeat the same build steps, independently of the technology being built.

There is an alternative to that strategy that might be useful to your context. Rather than running the tests as part of the build process, run them on the build image outside of the Dockerfile.

The idea there is to have the build be a pure build. In this case, the Dockerfile would be tweaked accordingly:

Then the test would be triggered by building up only the first stage, then running the command within a container of that image:

This might be useful if you want your build to be a pure build and not containing the tests or coverage. I personally prefer the other solution, since it move how you run the tests within the Dockerfile, and so the build steps might be the same regardless of what is in the container (dotnet, typescript, etc.) → it makes the continuous build uniform.