I tried Hey, the new e-mail service built by Basecamp. It is great, simple, smart. They’ve put a lot of thoughts behind re-inventing email. There are some pretty interesting features but fundamentally what is different is the opinionated workflow on which it operates.

The only mail that lends into the “Imbox” (how they name the important inbox) is from senders the user allowed. The first time they receive an email from someone, it ends in a staging zone, and then the user need to screen senders and decide if they want to receive emails from them, and where they want these email to lend: 1. in the imbox, 2. in a set of “feeds” (email that is casually read), 3. in the “paper trail” (receipts, …).

I liked the overall experience of Hey, and was about to subscribe. However there are two things that are a no-go for me. It doesn’t support custom domains for email addresses (yet)1, and there is no “archive” feature2. So I decided against that.

But I really liked the workflow, and I figured it shouldn’t be that big of a deal to re-create something similar in a plain-old mailbox.

Here’s what I need:

So I built Screenr.

Screenr plugs to an email server3, monitors email in folders, and classifies email into a set of folders.

Incoming emails from unknown senders (i.e. with an email address that has not been seen yet) are moved to a “For screening” folder. Emails from screened senders are moved based on configuration: either leave in the inbox, or move it to a particular folder.

To configure the tool, I just need to screen emails in the “For screening” folder occasionally, and move them based on where I want these to land: move emails from senders I still want in my inbox to a Screened folder (which then gets moved back into the inbox once Screenr registered the decision). Move emails I want to reject to a Rejected folder. Move emails I barely care about, such as newsletters, promotions, etc. into a newsletter folder. Move receipts, booking confirmations, order tracking info, tax documents, etc. into a Reference folder. If I move a single email between two monitored folder, then Screenr will move all of the mail from that sender into the new folder.

Screenr supports two configurations (at the folder level) to classify email: either move the email directly to the target folder, or through an intermediary “classification” folder (like the “Screened” folder for email for inbox). The reason for that is that you might want to occasionally classify email without creating a rule: e.g. if my spouse forwards me a booking confirmation it’s nice to file it into the Reference folder without automatically classifying everything she sends me as reference4.

Bonus points: now I default my behavior for processed email based on the folder I’m looking at. I archive email in my inbox - the reduced amount of email there makes inbox 0 much easier to attain - and delete email in the “newsletter” folder. Less thinking, more better.

how I use it

There are 4 folders I’m watching: 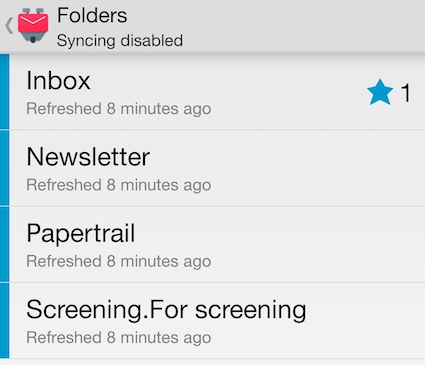 When something arrives in For screening, first I get excited because that’s proof that Screenr still does its job. Then I decide what to do with it by moving it in one of the folders: 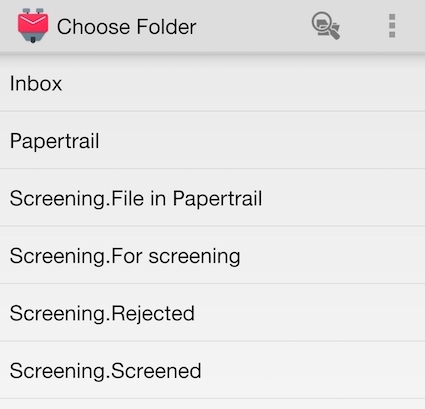 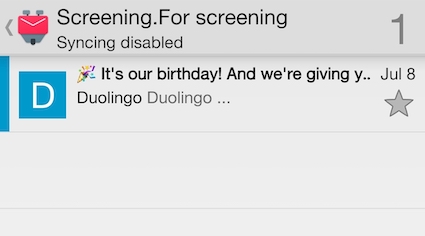 I’m using an additional folder called notifications for all the spam generated by tools, that I either quickly browse or simply delete when no time: 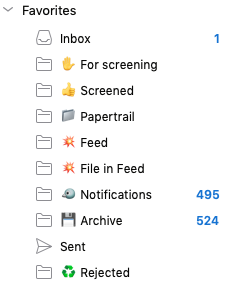 I wanted reasonable portability, my email provider recently released a bare-bones nodejs hosting and I figured I could give it a shot, so I settled for typescript. That host was hardly controllable, so I ended giving up and re-hosting onto the Kubernetes cluster from which you retrieved this static HTML page in a vastly over-complicated setup instead (more on this in this blog post).

The application itself is decomposed into 4 layers following the onion architecture:

For the storage of screening results, I settled on a file-based system which stores everything in memory and serializes it back to a file in storage when new rules are detected.

Building the IMAP connector was the most painful. The client libraries in the node ecosystem are not super well maintained and documented5, I tried two, and diagnosing some issues I was having6 was a straight pain that almost made me abandon. In retrospect I would probably pick .Net Core instead, given that the IMAP libraries are much more solid. If I want to make evolutions on that, I don’t exclude a rewrite ; the languages are sufficiently close that this wouldn’t be a big thing to do.

As mentioned, the hosting is done on a k8s cluster. A Helm chart specifies a single deployment with no service, and mounting a file share inside the container to store and retrieve the settings. Here is the extent of the infrastructure:

where to get it

To run Screenr, you need a computer that can run node ; ideally a server that you don’t turn off.

where I left it

There are some optimizations that could be done. For starters, this could use IMAP notifications to actually listen for new mail, rather than reconnecting and checking every 20s. I went for the straight forward thing right now, not sure if it’ll be a problem. Also this could be extended to support more rules, but it might require some more UI work which I don’t want to do, so that’s it for now.